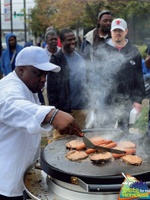 Michael Airhart began his life’s work as an eight-year-old in a single-parent apartment in the projects on the South Side of Chicago. He just didn’t know it yet.

It was there he learned to cook and he learned to sew. Most importantly, he learned to provide for himself, two brothers and others in the city’s largest public housing development, Altgeld Gardens. “Many of the parents were on drugs or just disappeared, so we had to survive,” recalls Michael, now 49.

It was largely due to the young resourceful chef that many of them did. “Everyone in the projects knew about me. Everyone knew what I was capable of, that I cared for everyone. As a kid, I was the one who was serving food to the kids. I was the one knocking on project doors asking for a can of tomato sauce, spaghetti, sugar, whatever. I would actually put a meal together for my friends.”

Today, he is still known on the street as someone who cares. Seven days a week.

“It’s all I know,” he adds. “I can’t drive by a homeless person and not stop. I am going to have food in my truck. I will always have clothes, always have shoes, socks, T shirts, pants, underwear. I’m gonna make them over.”

Six days a week, he’s out on the streets by 7 a.m. dispensing hot food from 15 or so pans out of his van. On some days, the clothes he hands out include Air Jordans, donated shoes he receives from all over the world through his Jordans for the Homeless program.

Soon he will unveil his new gift, Chicago’s first food truck for the homeless, complete with a shower in the back.

“A lot of people on the streets know me and they know they can count on me,” says Michael.

It’s no different at the North Side Housing and Supportive Services Shelter, where every Wednesday he provides and serves hot meals and often offers up soulful gospel, funk and disco as the shelter’s deejay du jour.

Since 1983, North Side Housing & Supportive Services has been working to eradicate homelessness in Chicago by providing emergency housing and social services to Chicago’s most vulnerable residents. The shelter serves people regardless of their situation. The aim is to first get people off the streets to address any compounding issues, working with each to find long-term stability so that they can go on with their lives.

“I love that place,” Michael says, and the feeling is mutual.

Executive Director Richard Ducatenzeiler gushes: “Michael has been a tremendous asset not only to the organization, but to our shelter residents.  He exemplifies the meaning of dedication and commitment and expects nothing in return other than seeing a smile on the faces of our residents.  We can always count on him to be there each week for the residents and is willing to assist in whatever way possible.  We are truly grateful for his vital role in helping us fulfill our mission.”

While Michael has been serving Chicago’s homeless for a number of years, his devotion went to the next level after a bitterly cold night about a year ago.

Michael and a friend, activist Andrew Holmes began a fundraising effort to benefit the North Side Housing Shelter. The campaign kicked off when the two men spent a night on the streets. Not just any night. Temperatures overnight hovered around zero and wind chill values dropped to 20 below. Michael’s body shut down at one point during the night, but with the help of one of their homeless camp’s permanent residents, the warmth returned to his body.

The ends justified the means. The fundraising efforts netted more than $10,000 for North Side Housing. Equally important, a relationship was born.

“I introduced myself to the folks at the shelter and from that day forward have been there ever since. From that day I have been serving the homeless faithfully every day,” says Michael.

And by night, he is devoted to his other passion. Michael makes mascot costumes, a passion also born out of the projects.

“I took a sewing class with the elders when I was a kid. To this day, I don’t know why,” he says with a smile. He has designed mascots for numerous teams and personalities and even created Sparky, the firehouse dog, his first. His work can be found on Facebook @nextlevelcustommascots.

While his mother and grandmother eventually moved the family to a better neighborhood, for Michael, the projects are never far away.

Luwana Johnson, Director of Interim Housing for North Side Housing, has this to say about Michael’s impact on others.

Get a taste of Summer Fest

Copyright © 2020 Taste for The Homeless - All Rights Reserved.